This morning, my relatives took me to the Portugese Synagoge (Portuguese Synagogue) at Mr Visserplein 3 in Amsterdam’s old Jewish quarter comprising an area less than 1km2. This area is now a cultural precinct. The Synagogue is a major drawcard.

This large and beautiful Synagogue is one of the most important legacies of the vibrant Jewish community in Amsterdam. It is also known as Esnoga or SnogeI – esnoga is the term for synagogue in Ladino, the traditional Judaeo-Spanish language of Sephardic Jews.

The first Jews to settle permanently in The Netherlands were descendants of Spanish and Portuguese Sephardic Jews, known as Sephardim. Their migration was triggered by a series of dramatic changes in the Iberian Peninsula, where they had lived for centuries in uncertain conditions. In 1492 the Spanish Jews were hounded by the Inquisition and had to choose between converting to Catholicism or leaving the country. Many fled to Portugal, but in 1497 they were forced to undergo mass baptism after all. Both in Spain and in Portugal, some of these conversos (converts) continued to practice Jewish rituals secretly at home, while living as Catholics in the eyes of the outside world.

In 1536 the Inquisition extended into Portugal. Many Jews then decided to flee the Iberian Peninsula altogether. A substantial number of conversos migrated to Amsterdam from the early 1600s. Once in Amsterdam, many returned to Judaism openly and publicly. They called themselves Portuguese Jews, even those who came directly from Spain. They wanted to avoid being identified with Spain, which was at war with the Dutch Republic through the Eighty Years’ War.

The Amsterdam Sephardic Jews came to be one of the largest and richest communities in Europe, especially during the Dutch Golden Age, and their aspiration to build a monumental synagogue reflected this.

In December 1670, the Sephardic Jewish community acquired this site at Visserplein to build a synagogue. Construction began in April 1671. In August 1675, the synagogue was opened.

The inscription above the entrance is from Psalm 5:8: ‘In the abundance of Thy loving kindness will I come into Thy house’. The sign also contains the Jewish equivalent of ‘1672’, the year the building was intended to be completed, and ‘Aboab’, the name of the chief rabbi who initiated the project.

The building is free-standing and rests on wooden poles; the foundation vaults can be viewed by boat from the canal water underneath the synagogue. The entrance to the main synagogue is off a small courtyard enclosed by low buildings housing the winter synagogue, offices and archives, homes of various officials, the rabbinate, a mortuary, and the noted Bibliotheek Ets Haim-Livraria Montezinos (Ets Haim Library Livraria Montezinos) which is the oldest functioning Jewish library in the world. The library is recorded on UNESCO’s Memory of the World Register.

The interior of the synagogue is a single, very high rectangular space retaining its original wooden benches. The floor is covered with fine sand, in the old Dutch tradition, to absorb dust, moisture and shoe-dirt and to muffle noise. Only five synagogues in the world have a sand floor, and this is the only one surviving outside the Caribbean region.

The Holy Ark is situated in the south-east corner of the building and faces Jerusalem. On the other side of the room is a tebah. The women’s gallery is supported by 12 stone columns, each representing a tribe of Israel. There are three large brass chandeliers that hold 1,000 candles. All candles are lit during worship services. The candlelight shines outwards through 72 expansive windows.

This is the most breathtaking synagogue I have ever seen. It is a place of genuine sanctuary and truly worth a visit. 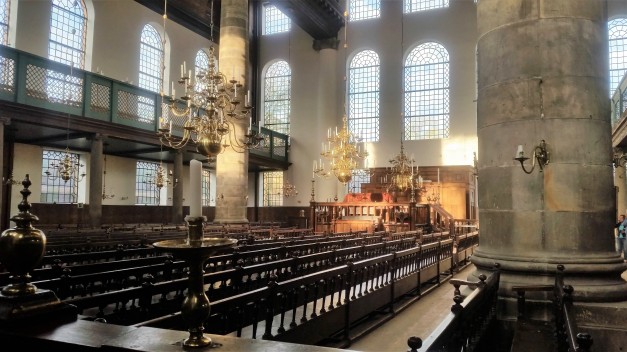 A large section of the main Synagogue’s interior 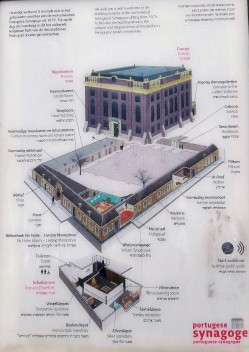 Layout of the Portuguese Synagogue complex 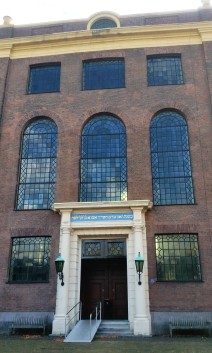 The entrance to the Portuguese Synagogue 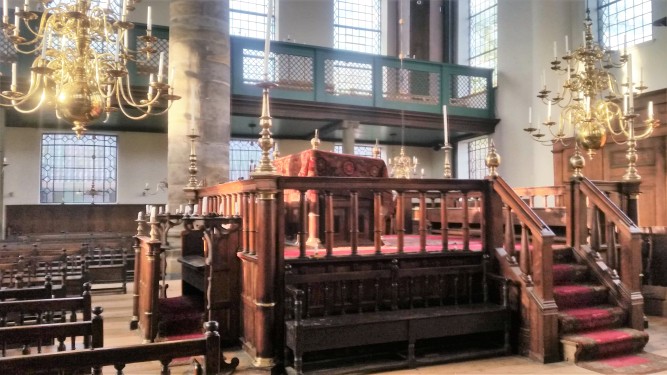 A side view of the Synagogue’s teḇah, a raised platform where the Torah scroll is placed to be read by a rabbi (for Ashkenazi Jews, the platform is called a bimah) 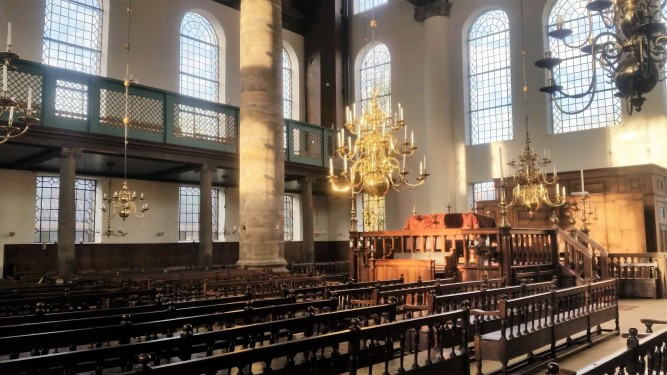 A broad section of the main Synagogue’s interior 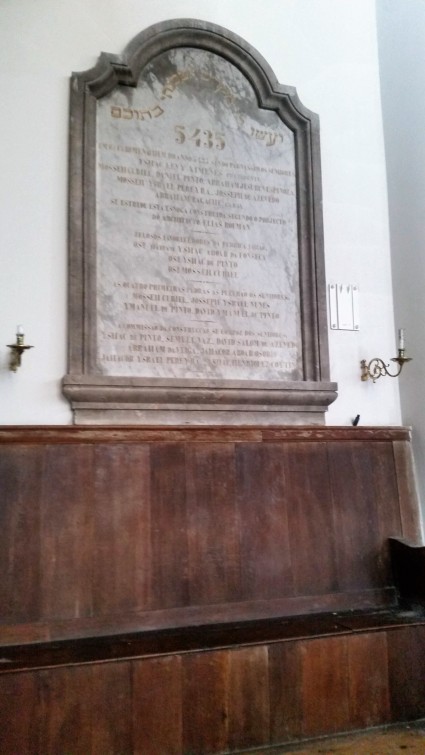 A foundation tablet from Jewish calendar year 5435 (equates to Roman calendar year 1674), the year that construction of the Synagogue was meant to be completed 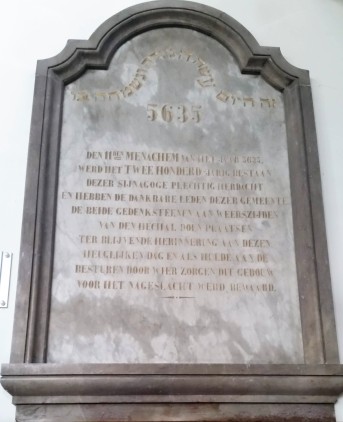 A close-up of the foundation tablet 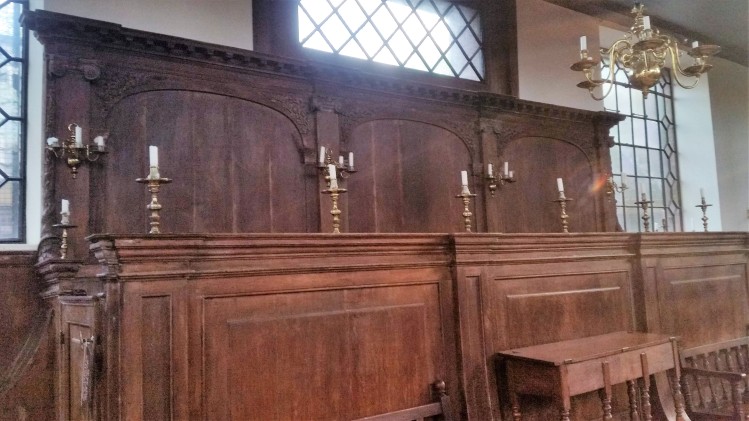 Woodwork against an end wall of the Synagogue

Another view within the Synagogue

Another side view of the teḇah 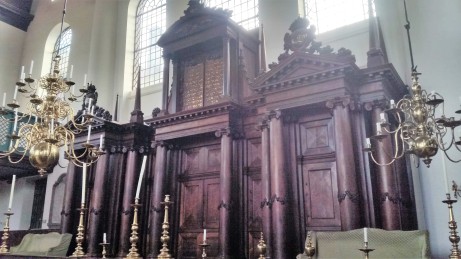 Another perspective of the interior

A side view of this section of woodwork 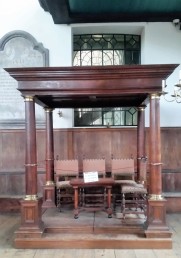 The chuppah, the canopy beneath which Jewish marriage ceremonies are performed 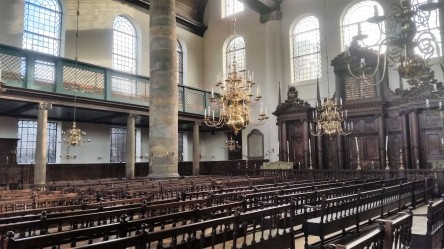 An expansive view of the Synagogue interior 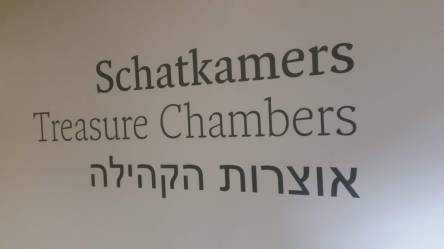 Entrance sign to the Schatkamers (Treasure Chambers) containing an impressive collection of ceremonial objects made from gold, silver, silk and brocade 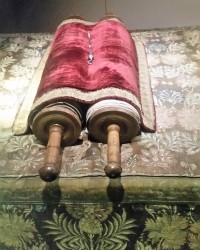 One of many historic Torah scrolls belonging to the Portuguese Synagogue 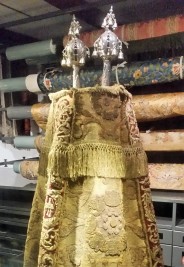 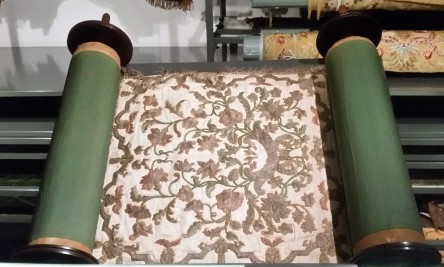 Another Torah scroll in the Treasure Chambers 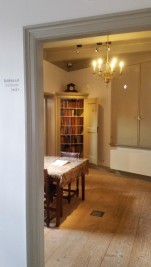 Entrance to the Rabbinaat (Rabbinate), the rabbi’s office 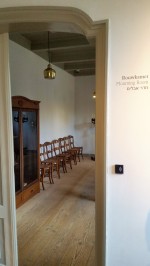 Entrance to the Rouwkamer (Mourning Room) 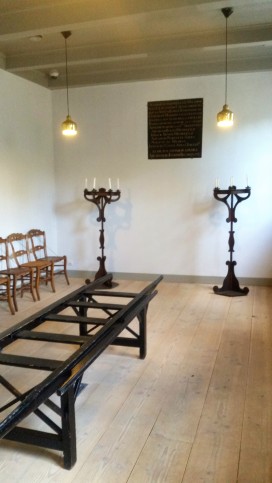 Inside the Mourning Room 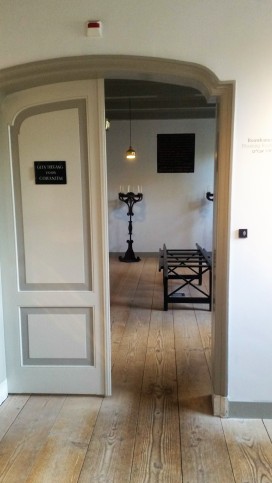 Perspective of the Mourning Room 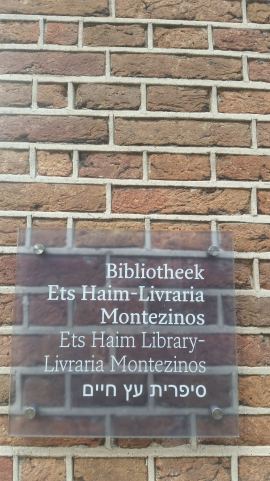 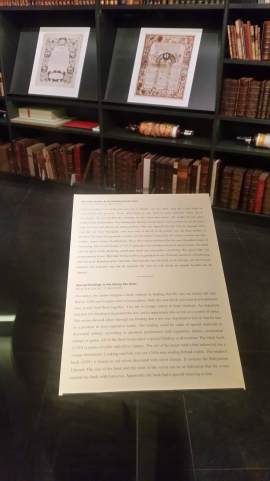 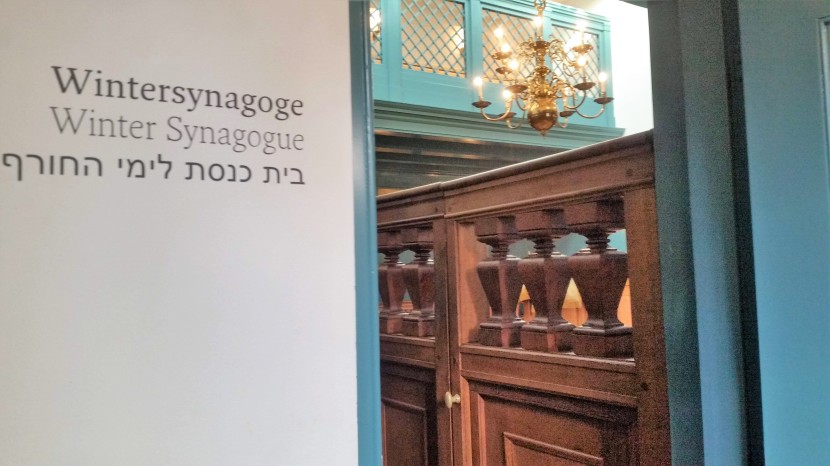 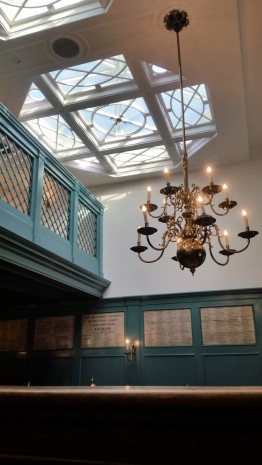 Inside the Wintersynagogue – it was created during a renovation in the 1950s, in a space formerly used as the Etz Haim seminary auditorium – the benches were taken from a synagogue originally built in 1639 and the hechal (inner sanctuary) dates from 1744 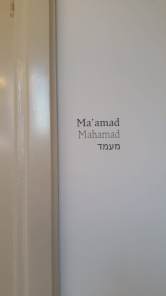 Entrance to the Ma’amad (Mahamad), the room reserved for the trustees ruling a Sephardic synagogue 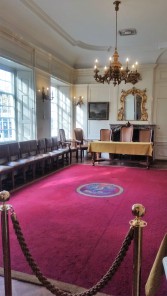 One side of the rectangular Mahamad 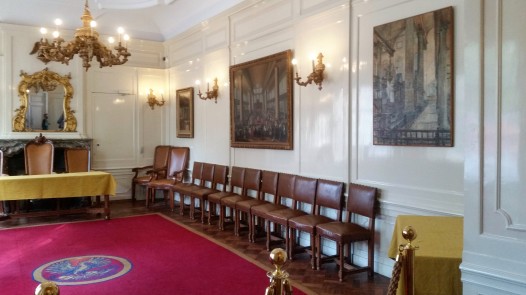 The other side of the Mahamad 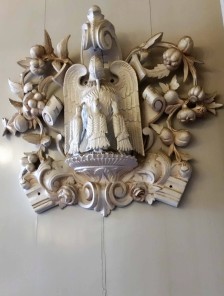 The coat of arms at the entrance to the Mahamad

View all posts by dherschel